Loni, located within just 18 kilometers of Ghaziabad, is known to have existed even during the epic era of Ramayana. Shatrughna, a famous mythological character from the Ramayana, took the life of the gigantic demon called Lavanasura, at the fortification in Loni. Demon Madhu was the father of Lavanasura, a very cruel being, brutal especially to the Brahmanas and the Hindu gods. Lord Rama was the eldest brother of Shatrughna, who was sent by Lord Rama to kill Lavanasura to put an end to the barbarism of this demon.

The name Loni was believed to be attributed to this part of Ghaziabad by a traditional myth, which indicates that the initial part of the name of demon Lavanasura, which was ‘Lanvan’, got associated with this place. ‘Lanvan’ actually means salt in the Sanskrit language. A historical legend also, which is still popular widely, acquaints people with the naming of the place as Loni. King Lonnkaran, famous even as King Subkaran, built his fortification here and named his territory as Loni. Existence of a salt zone at this place is also believed to be the reason behind the naming of this place as Loni, obtaining its name from ‘lon’.

The famous Indian sovereign Samudragupta fought the Kot War with Kot Kuljam at this historic site of Ghaziabad during the 4th century. King Chandragupta I was the predecessor of Samudragupta and Kot Kuljam were the descendants of the Kot dynasty. The Aswamedha Yagna was performed by Samudragupta after he took over the fort and won the war against Kot Kuljam.

The great king of the Chauhan Dynasty, Prithviraj Chauhan or Prithvi Raj III, had also been the ruler of Loni as the last of the Hindu kings ruling India as an independent monarch. Parts of his fortification still remain a major tourist attraction in Loni.

The 8th ruler of the Mamluk or Slave dynasty, Sultan Nasir ud din Firuz Shah or Nasir ud din Mahmud, spent the early years of his life at the fortification in Loni. Sultan Ghiyasuddin Balban, successor of Firuz Shah, had included Loni and its adjoining areas into his kingdom during his sovereignty.

Loni and the Delhi Sultanate

During the Mughal rule in India, the entire district of Ghaziabad along with Loni and its neighbourhoods, enjoyed much popularity as a preferred destination for leisure travels and hunting. The District Ghaziabad was transformed into a warfare zone during the supremacy of Delhi’s Turkish emperor, Sultan Muhammad-bin-Tughlak and the region in and around Loni witnessed around 7 major battles during his rule in the 14th century.

Historically, notorious Tamerlane or Timur, a Barlas king, entered forcibly into the northern part of the Indian subcontinent and started attacking the Delhi Sultanate. He demolished the fort at Loni during his invasion in India commencing his battle on the 17th of December, 1398. Sultan Nasir-ud-din Muhammad Shah Tughlak was the ruler of the Delhi Sultanate during that era, just at the closing of the 14th century.

Loni as part of Mughal Empire

Mahmud Shah Durrani, the famous Afghani ruler, is thought to have devastated the fortification in Loni in around 1789, ruins of which were used to build a backyard and a reservoir at this place.

Loni stood witness to India’s first struggle for freedom during the 19th century after the commencement of the Sepoy Mutiny of 1857 on 10th May in the nearby city of Meerut. 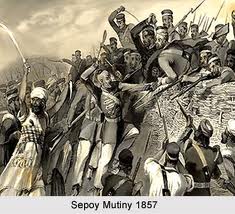 During the golden era of Mughal rule in India, three picturesque orchards used to landscape the area. These three orchards were named as Ranap, Uldipur and Kharanji Bagh. The wife of Mughal ruler Bhadaur Shah Zafar was Zinat Mahal and she built the Uldipur and Kharanji Bagh, both of which were captured during the Rebellion of 1857. Meerut’s Shaikh Ilahi Baksh purchased these coppices in the following years of the Revolt of 1857. The orchard named as Ranap, is famous as the Abadi Bagh Ranap in the surrounding localities of Loni and is thought to be about 500 years old. The walls bordering the orchard Ranap remain even today. These are some of the historically famous prime tourist attractions in Loni apart from an old temple of Shiva and two historic mosques, which are supposed to have been built about a century ago.